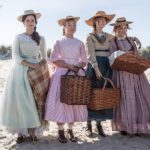 There are two incontrovertible facts: the first is that Louisa May Alcott was a fascinating human being. Her parents were Transcendentalists. She took lessons from Henry David Thoreau. She wrote a play for the Boston Theater and subsequently burned it due to infighting between her actors. Alcott briefly served as a nurse during the Civil War, survived typhoid fever, was a feminist, and was active in the abolitionist movement. To put it plainly, she was a baller. Oh, also? She wrote Little Women. That brings us to the second incontrovertible fact, which is that up until very recently, I was almost... Read More